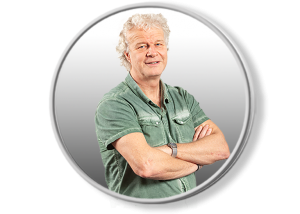 Adriaan van den Brule studied Biology at the Catholic University in Nijmegen. After his PhD research related to HPV and cervical cancer (Pathology department, VUmc Amsterdam), he worked as an associate professor and was responsible for the development of Molecular Diagnostics within Pathology, Oncology, and Infectious Diseases. In 2002 he became head of Molecular Diagnostics (Pathology, Microbiology) at the PAMM foundation in Eindhoven. Since 2011 he has been working as clinical molecular biologist in the Jeroen Bosch hospital. In addition, he has been working part-time at Rijnstate since 2012. He is also responsible for Molecular Diagnostics. Another passion of his is applied scientific research (e.g. viral oncogenisis, HPV, EBV, and more recently, colorectal carcinomas). He is currently active in administration in various internal and national advisory committees and at the European Congress for Molecular Diagnostics. Adriaan is registered as a medical molecular microbiologist and clinical molecular biologist in Pathology, a training programme recently accredited by the NVVP.