Pathology-DNA conducts many cytological tests for specialists and general practitioners from the regions of the three locations. These include gynaecological tests such as pap smears and non-gynaecological tests, such as urine, serous fluids, lung tissue samples, and puncture samples from different organs. Pathology-DNA is one of the five screening laboratories for the Dutch Cervical Cancer Screening Programme.

After receipt and preparation of the material, the cells are spread out or applied to a microscope slide using the thin-layer method. After air-drying or fixing in fixation fluid, the cells can be stained for microscopic evaluation. A cytology technician evaluates the samples. In order to form a diagnosis, some of the things that are tested are whether the cells show abnormalities (in terms of size of the nucleus and/or the cytoplasm) and what the underlying order of the cells is (in groups or not).
The cytology technician prepares a report of the findings and makes a suggested diagnosis to the pathologist. The abnormal, and to some extent, non-abnormal samples are also evaluated by the pathologist.
Cytological testing often answers the diagnostic query. If useful, immunohistochemical or molecular tests can be carried out. Some cytological testing is not sufficient, and histological testing will be required to get an (more detailed) answer to the test questions.

The advantage of cytological testing over histological testing is that the taking of the material is less intrusive for the patient and, because of the shorter processing, the result will be known sooner.

Pathology-DNA's three laboratories work together closely. For the field of gynaecological cytology, Pathology-DNA works according to the so-called thin-layer method (ThinPrep® by Hologic). All locations use the same equipment, allowing for a uniform approach. The DNA location Jeroen Bosch carries out the screening for the Dutch Cervical Cancer Screening Programme and the HPV testing for the three locations. At the DNA locations Arnhem and Nieuwegein, only indicative pap smears are evaluated.

The ThinPrep® 5000 processor is used for the batch processing of liquid cytological samples, producing uniform, thin layers of cells that are transferred to a microscope slide and fixed. The slide is immediately placed in a rack in a bath of alcohol fixation. After processing, the slide can be stained, covered, and microscopically evaluated. 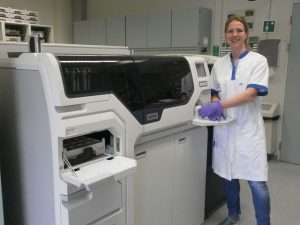 Cervical cytology with the T5000, part of the ThinPrep Imaging system.